NCSD Had Meeting With Madame He Bangjing At Washington, D.C. On Enhancing Promotion Of Bilateral Cooperation Towards Low Carbon Economic Development

The National Center for Sustainable Development (NCSD) announced today the visit to Washington, D.C. of Madame He Bangjing, Chair of the Strategic Development Committee of the China CDM Fund and former Vice Minister of the Ministry of Finance of China for talks with the NCSD Board of Trustees and several prominent Washington officials to enhance promotion of bilateral cooperation towards low carbon economic development. Madame He and her delegation including high-ranking members of the China CDM Fund met in the morning with senior officials of the World Bank and in the afternoon with former National Security Advisor Sandy Berger and Ambassador Paula Dobriansky, former Undersecretary of State for Global Affairs.

“The meetings with Sandy Berger and Paula Dobriansky helped to reinforce the message that there are vital channels of communications at the NGO and business level which can serve to clarify and accelerate work done at the government to government level,” said Mitchell F. Stanley, President and Trustee of NCSD. Madame He’s message of the need to begin tangible implementation of the goals of the China-US Low Carbon Development Cooperation Program was clear and immediate.

“China’s environmental, sustainability, and low carbon development goals are consistent with its worldview as a developing country with a population of 1.4 billion people, many of whom still live in rural poverty,” said NCSD Trustee Damian Omar Valdez, “and deserve access to the basic benefits of the economic development and innovation the developed world has enjoyed for over a century, and will surely lead to economic development returns for both China and globally.”

As often noted by Madame He in the visit, China has already made the commitment to a low carbon future that is jointly prosperous and ecologically safe. The establishment of the China CDM Fund is the tangible example of the State Council’s urgent and profound concern over the environmental costs of accelerating economic activity.

“The two countries (China and the U.S.) have a lot in common in their low carbon development. We can share our experiences and learn from each other. The joint program will bridge such experiences and advantages that will serve for low carbon development within and beyond the two countries.” said Mr. Chen Huan, Deputy Director General of the China CDM Fund and NCSD Trustee.

Madame He will return to Beijing on June 8. Her visit exemplified the pragmatic and decisive leadership, which has enabled the progress to date of the NCSD-China CDM Fund’s low carbon economic initiatives. The policy research and capacity building phase of the relationship will continue as well as the prudent evaluation of potential demonstration projects in low carbon investment in the near future. 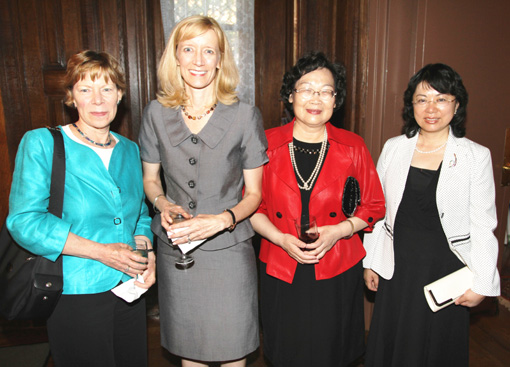 Madame He Bangjing had meeting with Ambassador Paula Dobriansky, former Undersecretary of State for Global Affairs