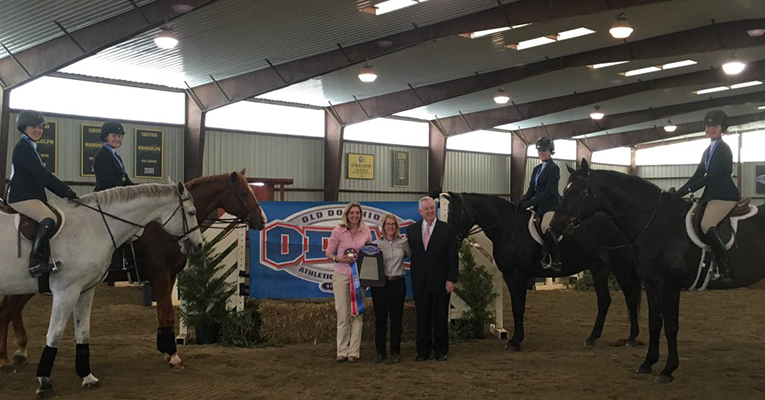 For the second year in a row and fourth overall, the Sweet Briar College equestrian team has claimed the ODAC equestrian title. This is the Vixens’ third title in the past five years, having won the championship in 1987, 2012, 2015, and now 2016.

The 2016 championships were hosted by Randolph College at the Randolph Riding Center on Friday afternoon. For the second-straight year, Sweet Briar’s director of riding Mimi Wroten was named ODAC Coach of the Year. First-year Emily Schlosberg was named the Conference’s rider and rookie of the year. Last year, Makayla Benjamin ’18 won both rider and rookie awards for Sweet Briar.

Schlosberg and Benjamin were the top-two average riders for the day, earning All-ODAC honors.

^ Sweet Briar was awarded first place based on a tiebreaker. For the ride-off, the top two riders from Sweet Briar and Randolph rode course A again and the average scores were added together to determine the winner.

* Lynchburg was awarded fourth place based on a tiebreaker. The tiebreaker was combined totals of the two Jumps classes.