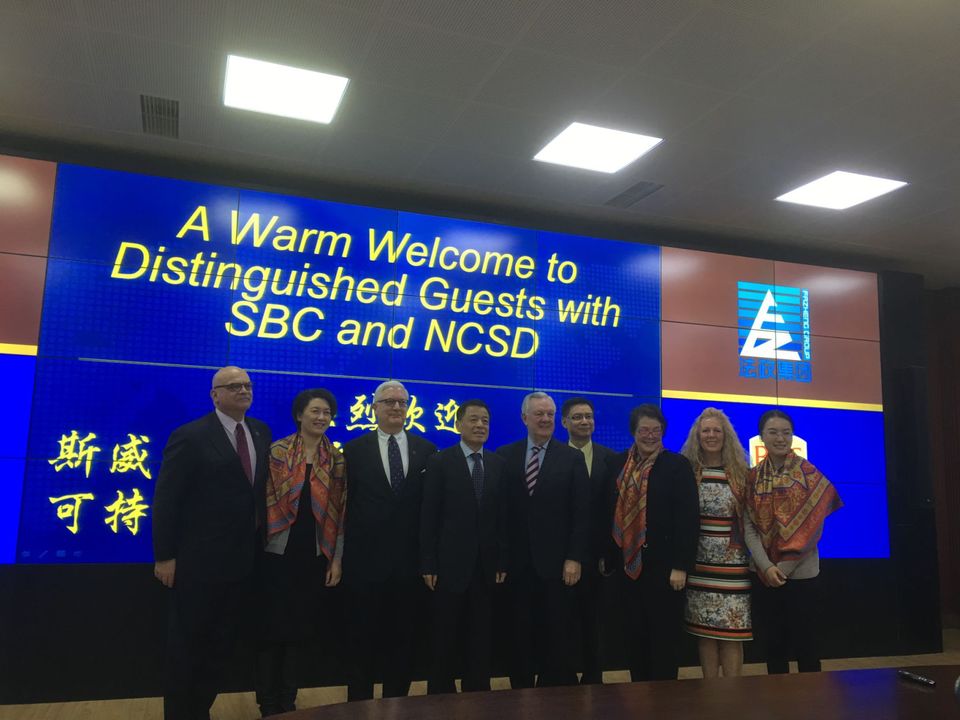 In the midst of a year of rebuilding, Sweet Briar College has entered a new partnership to recruit Chinese women to the school.

It’s teaming up with the National Center for Sustainable Development, a nonprofit based in Washington D.C. and in Beijing.

The agreement launching the new program came this month after Sweet Briar President Phillip Stone and other leaders from the college visited Beijing in late February.

“I was not just looking for an opportunity to go run to China for a week, but this was developing very quickly and in an interesting way,” Stone said.

The National Center for Sustainable Development (NCSD) will recruit high school students for a women’s leadership program, with hopes of attracting at least some students for the next school year. Sweet Briar will help compensate NCSD for its efforts and the college vet the students through its own application process and conduct Skype interviews to get to know the women and check their English proficiency.

Students in the program would attend Sweet Briar College for four years to obtain a bachelor’s degree in whichever major they chose, just like other Sweet Briar students. During the summers, though, NCSD is working to arrange special classes, programming and internships in Washington D.C. aimed at familiarizing Chinese students with how U.S. government works.

Notably, this is NCSD’s first foray into recruiting Chinese students for a U.S. school. The organization is focused on building bilateral relations between American and Chinese people via demonstration projects related to the environment, energy and education.

NCSD president Mitchell F. Stanley, who founded the organization in 2001, has an interesting and varied background.

Among many other government positions, he said he worked as a staffer in the Reagan White House for a couple years, and then led and organized the first presidential trade mission to China in 1985 under U.S. Secretary of Commerce Malcolm Baldrige. He’s also been active in leadership in the financial sector, especially online banking.

Stanley said China’s Vice-Premier Liu Yandong gave an important signal about Chinese interest in the development of women leaders in her remarks at the seventh US-China Women’s Leadership Exchange and Dialogue in Washington on June 23.

“I believe that if we can release the full potential of ‘she power’ in China and the U.S., it will provide new impetus to the people-to-people exchange and to the building of the new type of major country relations between our two countries,” Liu said, according to a web posting by the State Council of the People’s Republic of China.

The same day Stanley said he read China Daily’s account of Liu’s speech, he also read a Washington Post article about Sweet Briar — most likely coverage of the signing of the June 22 agreement allowing the school to remain open, following a high-stakes legal battle and fundraising efforts waged by alumnae and their allies against then-college leaders who said the school faced insurmountable financial challenges and had to close.

A sense of a connection between the two stories flickered in his brain.

Just a few days later, he said, an old classmate contacted him on behalf of a woman involved with the Saving Sweet Briar movement, wondering if there was something Stanley could do to help the school.

From there, bit by bit, the path to partnership began to emerge.

Sweet Briar, Stanley said, is well-known for its liberal arts reputation by many people in the D.C. area. China, he said, has a growing interest in liberal arts education, after decades of emphasis on technical and professional-training focused models.

He sees the Sweet Briar partnership as another kind of demonstration program, one that would help Chinese women better understand the United States and be better equipped to help find creative solutions to problems in that country and to work together with U.S. leaders in the future.

Perhaps someday, he said, it even could lead to the establishment of similar small women’s liberal arts colleges in China.

Stone said he was welcomed with open arms on his visit to Beijing, where he met with NCSD leaders and visited a private high school and a public high school with an arts emphasis.

Students he met, he said, seemed excited about the beauty of Sweet Briar’s campus from the video they saw, and interested in Sweet Briar’s engineering program.

It’s hard to say how many students the program might attract for fall 2016 — the partnership is starting late in the game, but leaders do hope to get at least some Chinese students by that time.

At full capacity, Stone said, he could see the Chinese Women’s Leadership Program making up as much as 10 to 15 percent of the total Sweet Briar student body. The school has 240 or so on-campus students, Stone said, with hopes to grow dramatically in the years ahead.

International student recruitment and the tuition it would provide has been an important part of Sweet Briar College’s plans and hopes for rebuilding after the school shrank by almost half in the wake of the closure attempt. Even the prior size, about 530 on-campus undergraduate students in spring of 2015, is unsustainable in the long term, Stone believes. He’s looking to reach 800 students by the 2019-20 school year.

Besides China, Stone also mentioned reaching out to India in comments at a town hall meeting held at the school in February.

“I think it’s exciting to have people come here to look at our country …” Stone said of the Chinese students, adding that he thinks it will be fun to talk to them and learn more about their country and their culture. “I just think it is going to be nice to have new friends, new students on campus.”