Sep 13th, 2010 – Tianjin, China – World Articulated Naturality Web (ANW) Forum, the sub-forum of the 2010 Summer Davos held in Tianjin World Financial Center on Sep 13, 2010. As one of the founding member of the ANW Forum, Muuzii was invited to share its vision in mobile application of Augmented Reality. With the experts in augmented reality, mobile communications and IT industry come together from the United States, Britain, Germany, Japan, New Zealand, Israel, Singapore, Australia and China, the push for the next generation of augmented reality technology into the real application in mobile environment will open up a whole new emerging technology and applications market.

Articulated Naturality Web fuses augmented reality (AR) and the Internet together. ANW technology services include video scene feature identification, image processing, multi-sensor coordination, real-time positioning, wireless access, media information, digital publication, entertainment and other fields of augmented reality. The combination of these components coupled with the Internet and mobile Internet technology will form an emerging industry. The organizers of the World ANW Forum have decided the annual meeting was necessary to support the standardization and commercialization of the ANW according to the international practice’s mission to drive the commercialization, internationalization, and futurization of the ANW throughout the world. 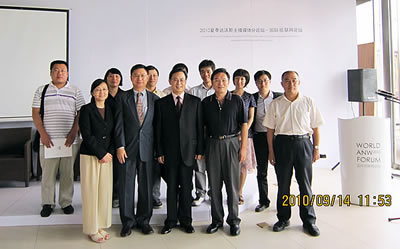 As a pioneer in the field of mobile learning, different from the other research institutions participants, Muuzii is to put the “augmented reality” technology into a daily mobile use. When being asked about how to apply the “augmented reality” technology to mobile learning, Eric Fang, the CEO of Muuzii said: “Combination of Augmented Reality and Mobile Internet will make mobile learning more vivid and transform individual learning behavior in the way that we have not experienced. Muzzii has been research on application and utilizing our cutting-edge technology to allow our users to experience a totally new way of reality virtual learning. This means the next generation of learners can obtain the information from both virtual and reality, creating more vivid learning experience at anytime and anywhere. It brings a new learning revolution that not only will be complementing the traditional mobile learning model, but more importantly to create a new way of capture and learn behavior which transform our daily life in a fun and exciting way”.

“The first mobile augmented reality application technology is being developed by Muuzii and will be published early next year. We have reason to believe that the first ANW application in learning will overturn the traditional thinking, start another revolution in learning’, added Fang Ling, President of Muuzii.